Episode 88: The Tour is Dead, Long Live the Tour

We wrap up the last week of Tour and talk about the takaways! Included: Jeff is disappointed in Cancellara, Anna is impressed with Saxo, Jeff wonders if Tony Martin could be a GC threat someday, and Anna looks back at Nibali’s racing history. Also: Anna rubs it in that she was right about Wiggins moving to the track and Jeff rubs it in that he beat Anna in the fantasy league.

Do I love it? Why yes I do! While the front of the kit is basically last year’s kit with a white band instead of a black one (a simple, classic, yet slightly boring, design), that BACK! I love the new design on the back of the kit. I really can’t put my finger on what I love about the kit, but I think it has to do with the color arrangement- the way the red pops against the white, that Cervelo “é”. It’s going to look so good on the camera. And they seem to be taking our advice of making the back more distinctive than the front- as that’s all we see in the peloton!

New kit alert! Lotto Belisol has released their new kit look, with the help of their favorite model, Tosh van der Sande (he modeled their kit last year, too). Does he get the job because he’s the most attractive? Or because he’s the youngest? Anyway. I actually quite liked their old kit (pictured here). I liked the splash of yellow, the color blocking, etc. While this year’s kit is quite a makeover, I have to say I also like this version of the kit as well! I dig the retro look, I LOVE the red, I like the Belgian flag colors around the leg band and arm, and I’ve always enjoyed the Lotto logo on the leg.

I am confused as to why the back of the jersey is largely blank, since that get so much screen time during a race. But maybe they’re counting on most pictures being taken from the front as they win… Also, they have that weird stitching on the legs like the OPQS kit that makes their thighs look odd.

But overall, I quite like the kit. And the bold red will appease some of the critics who complain about the monochrome nature of the kits in the peloton!

I don’t have a problem with Rapha, per se. They make great products, that look reeeeally good. Maybe I’m annoyed at the price. Maybe I’m annoyed that even if I wanted to spend money on their products, I couldn’t fit in most of it. But even that shouldn’t really matter, as most cycling clothes don’t fit me and cost more than I’d like to spend. So I can’t quite figure out what my problem is with Rapha. Maybe the problem is not Rapha, but me- I don’t like to be an early adapter for anything popular. ANYWAYS. We’re not here to talk about my feeling for Rapha! We’re here to talk about KITS. I didn’t think it was possible for the Sky kit to get any more boring, but apparently it is. 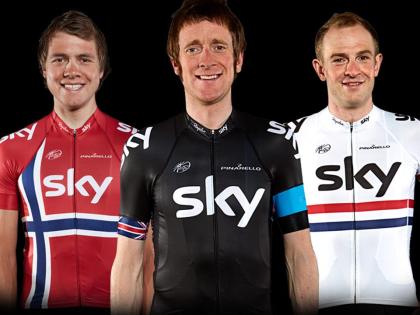 I can’t imagine there will be another kit that will provoke more “love it or hate it” debate this season, but I have a hard time getting excited. I know many will say it’s understated and sleek. And while I am fans of  both of those things, in this case I think those words are code for “underwhelming.”

When you get right down to it, it’s just a black kit with a blue armband. Which is not that inspiring. It still has the blue stripe up the back, which is good. I don’t know why more teams don’t make the back of the jersey more distinct, as this is what is what really helps tell everyone apart in the peloton.

But, as much as I’m not inspired by the kit, it does still appeal to me. I love the black and blue combo, and I appreciate that Sky is wealthy enough it doesn’t have to plaster millions of logos all over the jersey. And the riders are still look good wearing it!

Score: 7/10 It gets extra points because the national championship jerseys are so awesome.

Ah, Astana. Such mixed emotions you raise in me.  With new addition Nibali and Fuglsang, I should be chomping at the bit to support your team. But I just can’t bring myself to do it. I mean, even the fact that my heart softened towards Vino and his robot, no-eyebrow face, cannot make me enjoy the Astana kits. There is something about them that makes me curl my lip. I think it’s overwhelming baby blue. If the kit was more of balance between yellow and blue, I might be more inclined to like it. The 2013 kit has succeed in getting rid of pretty much all of the contrasting yellow and now the kit looks like a baby blue condom. Imagine what the skinsuit is going to look like. *shudder*

In all honesty, it’s not a terrible kit. There are, and have been, worse kits. But it’s just not the kit I’d like to see Nibbles wearing. He’ll always be a blue and green Liquigas boy to me.

Rating: 4/10 A tiny step up from terrible, but a huge step away from great.

Even though big man on campus Cav was joining their team, OPQS didn’t do much of an overhaul on their team kit.

Honestly, I like last year’s kit better. I’m not sure what they were trying to accomplish with that strange blue on the shoulders. It looks like a dot matrix pattern from the old printers. Or one of those 3D things that make a shape if you stare at them long enough. If they had consulted me (and why they didn’t, I have no idea), I would’ve made them put a dark blue on the shoulders and put the light blue on the sides. 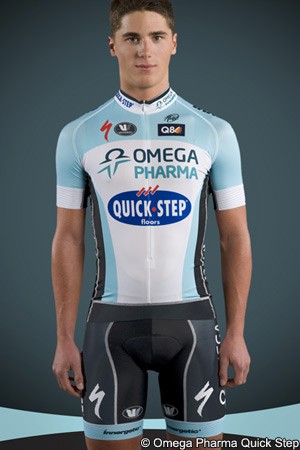 I was pretty ambivalent about last year’s kit, but now that they’ve made it worse, I’m already nostalgic of the old days. *sigh (but I still hate the way the Quickstep logo looks like an afterthought)

Edit: One addition that is very cool is that they’ve put the Twitter of the rider on the side of the kit! I love this idea. OPQS has really embraced social media and this is just one more example!

Score: 4/10 because they ruined a perfectly good kit

The first thing Novo Nordisk did when they took over the title sponsorship of Team Type 1 was to get rid of that awful kit.

The blue, the green, the white, the black- that I could deal with. But I couldn’t deal with that weird beige color. Where did that come from?? What did they think that color would add to the jersey?? Questions that will never be answered. But thankfully, we won’t need these questions answered this year, as Novo Nordisk has taken over title sponsorship of Team Type 1-Sanofi and their first order of business was to apologize for last years kit by gifting us with this:

There is nothing this girl loves more than all white kits. They’re just so….revealing. I’m just happy it’s not me that has to wear an all white kit. My self confidence couldn’t bare it! In all honestly, though, I like the simplicity of the kit and the color choices- huge, huge improvement over last year’s kit.

Hard to believe the new cycling season is just around the corner. While the off season seems to last ages for us fans, I imagine it seems a lot shorter for the riders, who probably only get 2 months, if that, of off season. But I imagine this makes it easier to keep race weight, as there is less time to stuff one’s face.

But, honestly, the real reason I love the start of a new season is the reveal of the of new/updated kits. I don’t know if other sports change kits as much as cycling does, but I love how the look of the peloton changes every year. The design of  a kit can determine whether or not your team stands out in the technicolor of the peloton. The difference between a boring/uninspired kit and a well designed kit is the difference between blending into the masses and being easily identifiable. As the new kit designs start coming out, I love seeing what teams come up with. Also, I love judging them.

So, without further ado, my first kit review of the season.

While the Movistar kit is, again, nothing too exciting, I have to say I prefer the 2013 version to the 2012 version.

To me, the kit looks black, but the website calls it “a darker blue.” Either way, I much prefer the darker background to the weird navy/not navy blue of 2012 (even thought I do like the blue/green combo!).

Also I can’t tell, but it seems like the strange white marking on the side and arm are gone too. While it was an interesting effect (it was even more pronounced in the 2011 kits. Really glad that was left to the dogs), it looked a little bit too much like they had their shoulders and arms wrapped up with Spidertech tape to work.

Score: 6/10 It’s not offensive, it’s an improvement over last year’s kit, but it’s not that interesting overall. They’re not going to really stand out in the peloton, unless they have the lime green helmets again! But I’m withholding judgement until I see their national champs kits- the 2012 rendition was not inspiring.